We are currently focused on improving the versatility and user-friendliness of our prototype video rate AFMs. In particular, we want to make these AFMs useful for imaging a wide variety of biological samples in fluid. In order to achieve this goal, new, compact instrumentation (having high first-order resonance frequencies) have to be combined with new control engineering approaches. We apply new techniques such as finite element analysis, field programmable gate arrays (FPGA) electronics and modern materials in the development of our instruments.

The current generation of AFMs are limited by two major factors:

1. Slow imaging. Typical line scan rates for commercial AFMs imaging biological samples are between 0.5 and 10 Hz. This results in imaging times ranging from 13 sec for very low resolution images scanned rapidly (128 x 128 pixels scanned at 10 Hz) to 512 seconds for high resolution images scanned at moderate speed (512 x 512 pixels scanned at 1 Hz). A truly high resolution image at 5 megapixel resolution (producing an image similar to that provided by consumer digital cameras) scanned at 0.5 Hz to maximize resolution, would take 4472 seconds, or 75 minutes. In fact, even many of the high resolution (512 x 512 pixels) images taken in our lab within the past year with commercial AFMs took over 30 minutes because sometimes maximum resolution was only achieved below 0.5 Hz.

2. AFMs are hard to use compared to most other types of microscopes and compared to other equipment typically used in biomedical research.

Neither of these performance limitations is fundamental to the AFM, and the AFM has a long way to go before fundamental limits are reached. Our overarching goal is to push the capabilities of AFMs, particularly AFMs for biological applications, to the limit.

In 2005 and so far in 2006, we have worked to integrate preliminary improvements to the force sensor, scanner, controller, and data acquisition system of the AFM in initial efforts toward raising the imaging speed of the AFM by two orders of magnitude. In doing this, we have been working on integrating the high-speed scanner, small cantilever head, high-speed data acquisition system and novel control methods we have been developing to produce a video rate AFMs. By May 2005, we developed an AFM that can take 256 x 256 pixel images of any types of sample (biological or not) at 8 frames per second; the line scan rate we achieved was therefore over 2,000 lines per second.

With this integration, together with a conventional Multimode® head from Veeco Instruments, Woodbury, NY, and driven by an amplifier we built in collaboration with TechProject in Vienna, Austria, we initially recorded images at resolution 256 x 256 pixels of biological samples such as collagen at frame rates of up to 6 images per second with relatively stiff contact cantilevers in air. Though the frame rate is impressive, this system is not yet ready for general use, because contact mode imaging in air with relatively stiff cantilevers is not suitable for most biomedical research.

We produced several papers here. In the first paper, we introduced our novel data acquisition system - Data Acquisition System for High-Speed Atomic Force Microscopy (Fantner et al., Rev. Sci. Inst. 76, 026118 [2005]). We then published a paper summarizing our past and introducing our present efforts for fast AFM imaging (including our 8-frame per second AFM), as well as discussing in it some key challenges for the next generation of high-speed AFMs (Schitter et al., Proc. IEEE [Advanced Intelligent Mechatronics], 2005) . Two of our manuscripts have recently been accepted for publication discussing our developments - Components for High Speed Atomic Force Microscopy (Fantner et al., Ultramicroscopy), and Design and Modeling of a High-Speed Scanner for Atomic Force Microscopy (Schitter et al., 2006 American Control Conference).

In order to improve the mechanical behavior of the AFM's scanning unit, we developed a novel mechanical scanner design based on piezoelectric stack actuators and a flexure mechanism that decouples the axes of motion (in the X and Y directions) and clamps the actuators on both sides in order to shorten the mechanical paths to a functional minimum, and keeping the mechanical structure stiff. (Stiffness is important to achieve high first resonance frequencies in the respective positioning direction for highest performance of the new scanning device). It inner frame suppresses trampoline motion of the scanning system in the Z-direction by reducing the mechanical path length of the Z-actuator's support, thus rigidly supporting the Z-actuator. We describe the design and function of this new scanner, which we optimized with finite element analysis, in Design and Characterization of a Novel Scanner for High-Speed Atomic Force Microscopy, that will be presented by Dr. Georg Schitter at the 4th IFAC-Symposium on Mechatronic Systems, to be held in Heidelberg (Germany) in September 2006. (It will be presented in a session Dr. Schitter is organizing for that conference - "Instrumentation for scanning probe microscopy"). Using this new scanner design, we were able to record 256 x 256 pixel images at a line scan rate of 2060 Hz, i.e. at 8 frames per second. The scanner has a maximum scan size of 13 microns. 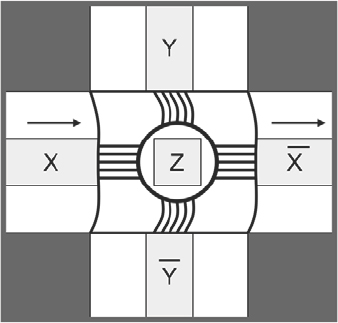 Figure 3 Implementation of the high-speed scanner viewed from the top (A) and bottom (B). 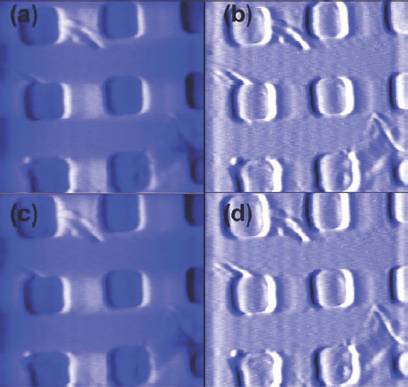 Figure 4 Demonstration of attainable resolution and speed of high-speed AFM developed in 2005. Two consecutive images taken at a line scan rate of 2048 lines per second at a resolution of 256 x 256 pixels, i.e. 8 images per second. The sample is a silicon calibration grating with a pitch of 3 microns, the height of the topographical steps in the grating is 44 nm. The width of the frames is about 8 µ m; topography images: (a) and (c); deflection images: (b) and (d).

We also began, in collaboration with the startup company SCL-Sensor.Tech. www.sclsensortech.com, preliminary testing of small cantilevers. Small cantilevers are a technological advance already well known to experts in the AFM development field, that are anticipated to greatly increase the speed and resolution of AFMs for many applications. They are particularly significant for biological applications, in which minimally destructive and maximally sharp imaging could both be achieved.

A cantilever with the dimensions 25µm x 10µm x 0.1µm having a mass of 77pg can image a sample 10 times faster than the smallest cantilevers currently commercially available (to our knowledge, the Olympus biolevers). We manufactured cantilevers 10µm wide and 100nm thick with various lengths that we reported in a manuscript - Components for High-Speed Atomic Force Microscopy - that has recently been accepted for publication in Ultramicroscopy. These cantilevers have resonance frequencies in air between 150kHz and 350kHz with spring constants between 0.001 N/m and 0.005 N/m. The Q-factors in air are between 13 and 21. The cantilevers are fabricated from a low stress SiN composite. Together with SCL-Sensor.Tech. www.sclsensortech.com we also produced cantilevers for tapping mode which have resonance frequencies of up to 2MHz while still keeping spring constants below 2N/m. 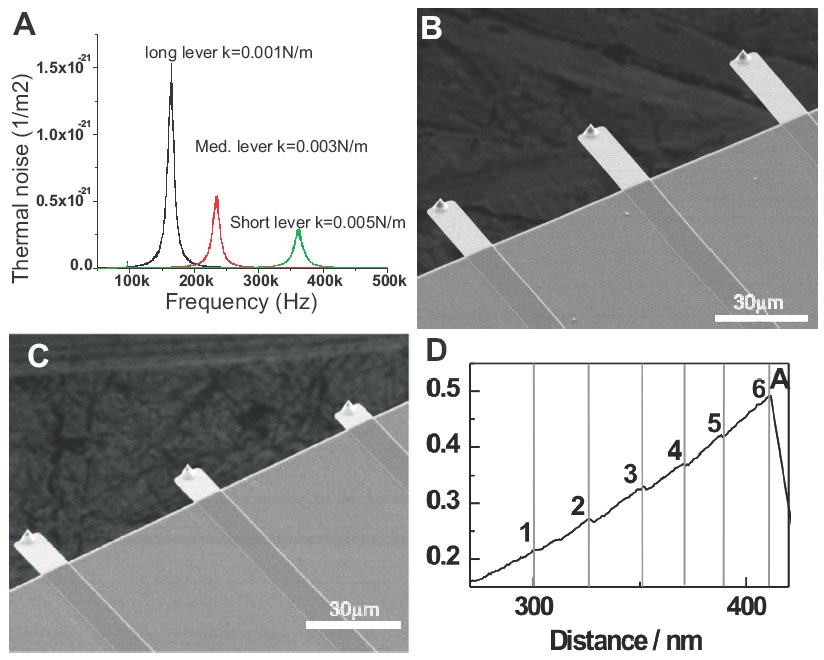 Our work on the development of AFMs for biomedical applications is based not only on familiarity with the excellent research done by other groups, but also on the long tradition we have of performing biomedical research in our own laboratory and in collaboration with other groups, especially at UCSB. In order to best build AFMs for biological applications, we have necessarily been involved in frontier biophysical research by determining needs at those frontiers to incorporate our AFM designs. We have therefore been involved, since before 1989, in innovative biological explorations in ongoing multidisciplinary collaborations in addition to our AFM building. Please click here for a full list of our publications, including all papers by Paul Hansma from the start of his scientific career, to see the wide range of biological projects with which we have been and continue to be involved.

In recent years, in developing better AFM pullers for single molecule force spectroscopy, we have focused on understanding how force spectroscopy can contribute to an understanding of the tissue properties of complex tissues such as diatoms, tendons and bone. Our ongoing research on bone and other biological materials in parallel with our AFM development influences the framework of specifications in which we build our AFMs; this research also has biomedical significance of its own. We welcome you to visit our webpage sections on our biomaterials research.