An Introduction to AFM

AFM differs from other types of non-optical microscopy in that it can image samples under natural conditions - in air or water - without the samples being placed under destructive artificial conditions, such as drying, coating with metal, vacuum or freezing. It is therefore especially useful for biological applications, and as AFM performance and range of time and spatial resolution improves, increasingly smaller biological samples (such as molecules and molecular assemblies) can be imaged at increasingly faster speeds, producing videos of biological processes at very sharp resolutions (down to several nanometers). The importance of the AFM being developed to allow researchers to track biological processes in real time cannot be overstated - such a capability will allow researchers to actually see, at both spatial (down to the atomic scale) and time resolutions, how disease develops, and how the healthy body functions. One question that AFM can help answer is how proteins pathologically misfold in the human body, producing diseases such as Alzheimer's and Parkinson's Diseases. (Depending on the stage of conformation, proteins fold and misfold at various rates - from nanoseconds to several seconds). Please visit our page on AFM development to read about exciting recent developments in producing high-speed AFMs.

With AFM, a sample is analyzed by probing the surface with a tip, and the interaction between tip and sample is measured. Physical topography, charge density, magnetic field, and other surface properties can be discerned and measured. The Atomic Force Microscope (also AFM) can also determine the mechanical properties of molecules by pulling on them - a technique called single molecule force spectroscopy, which was developed by Hermann Gaub and Julio Fernandez with the AFM. Figure 1 is a schematic showing the basic operation of the AFM [Oberhauser et al. PNAS (January 2001), Vol. 98 (2): 468-472]. Figure 1 is also a particular example of the single-molecule force spectroscopy technique, as it shows the AFM pulling on a protein with three folded domains (the bunchy structures linked with the protein backbone). 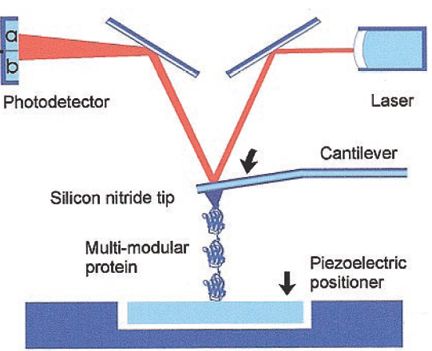 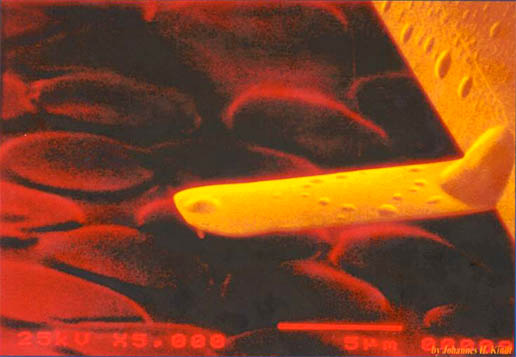 Figure 3 One of our very early prototype STMs. 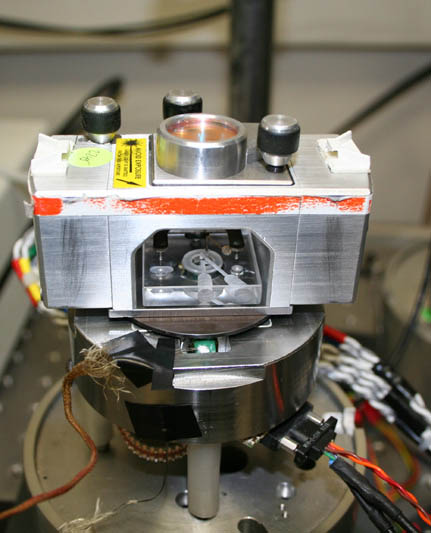 A Short History of AFM

Invented in 1986 by Binning et Al., the Atomic Force Microscope has undergone much development. The first AFMs operated in contact mode. (See Binning et al., Physics Review Letters 1986, and Rugar and Hansma, Physics Today 1990). In contact mode, the tip, mounted onto the end of a flexible cantilever, raster scans the surface of the sample. The deflection of the cantilever due to tip-surface interaction reveals the sample surface. Samples can be analyzed in air, liquids or vacuum. In liquids and vacuum, the absence of strong capillary forces due to a thin liquid film on all samples in air can result in higher resolutions. Biological samples are difficult to scan using contact mode because they are often soft and weakly bound to the surface and therefore can be damanged easily.

Non-contact mode was first introduced in 1987. (See Martin et al., 1987). Developed in an effort to more accurately image soft biological samples, in non-contact mode the cantilever oscillates close to its resonant frequency at a small distance (1-10 nm) above the surface. Long-range attractive forces induce changes in the amplitude, frequency and phase of the cantilever and maintain a constant distance during scanning. Because the forces on the sample are much lower than in contact mode, even the softest samples can be imaged without damage. Imaging in attractive mode is also possible.

The Optical AFM Version 4 was also developed in 1989. This fourth prototype of the AFM generated interest in the commercial development and implementation of AFMs.

Tapping mode in fluids was first introduced in 1994 by the Hansma Lab. (See Hansma et al., 1994) In the first implementation of tapping mode in fluids, the sample, which sits on a piezoelectroc scanner, oscillates up and down and taps the tip at the apex of each oscillation cycle. The amplitude of the piezoelectric is set manually at the beginning of the run, and the tapping force is held constant by a feedback loop.

Smaller cantilevers were developed in 1996, allowing higher resolution and smaller scanning times. The Hansma group began developing a new generation of AFMs that would utilize these smaller, lighter cantilevers. For biological samples, desirable cantilevers have a higher resonant frequency (and therefore a higher scanning speed) and a low spring constant. This is most easily achieved by decreasing the mass of a cantilever. Recently cantilevers have been fabricated on the order of 9-40 microns in length with resonant frequencies an order of magnitude higher than commercially available cantilevers. (See Schaeffer et al., 1997b)

The next prototype was a small cantilever AFM Version 5. The major differences between this AFM and previous AFMs lie in the optics design of the microscope. This prototype has a much smaller laser spot allowing for smaller cantilevers to be used. It also includes an integrated illumination source, essentially combining an optical microscope and an atomic force microscope in the same piece of equipment.

Improvements in instrumentation and understanding of the Atomic Force Microscope has led to its wide use in many fields in engineering, materials science and biology. Our laboratory is committed to further improve the instrumentation behind Atomic Force Microscopy and apply its capabilities into new, exciting areas, in particular, in biomineralization and in the life sciences.