Goal of our group | Background | Focus on Biomineralization

Goal of our group

The ultimate goal of our group in our biomaterials research is to help create a fundamental understanding of the molecular mechanisms responsible for the fracture behavior of biomaterials. Our current focus is on the biomineralized material bone. We aim to create an understanding fundamental fracture behaviors in living bone by studying molecular interactions between the mineral, collagen and noncollagenous phases of bone. We draw on our group's long-established interdisciplinary collaborations with biologists, chemists, physicists and materials researchers at UCSB, collaborations with established bone researchers, our expertise in protein mechanics, and our inventions in Atomic Force Microscopy (AFM) as keys to revealing nanoscale dynamics in bone.

We also anticipate that lessons we learn from nature in our investigation of bone fracture mechanisms will inform the construction of very tough but very light advanced materials with dynamic self-healing behaviors, and the treatment of bone diseases such as osteoporosis and osteopenia.

We use a variety of techniques to explore bone fracture mechanisms  imaging with AFMs and Scanning Electron Microscopes (SEMs) (to view bone components/building blocks and bone structures), AFM force spectroscopy of proteins (to mechanically test molecules of biomineralized tissues, singly and in assemblies), immunolabeling and staining techniques (to determine the location of bone glue molecules), and unique mechanical testers we have constructed that are combined with high-speed photography, and can test 5x5x5mm trabecular bone cubes as well as single trabeculae (to see the details of bone fracture in real time under various experimental conditions).

We envision that the unlocking of many of the mysteries of how bone works, and the much deeper understanding of bone that will result, will be highly relevant in the development of new diagnostics for bone fracture risk, new therapies for bone diseases such as osteoporosis, and the development of new advanced bioinspired materials mimicking the self-healing behaviors and extraordinary fracture resistance of bone.

Although bone research has become our main biomaterials research focus in recent years, we have continued to research other biological materials apart from bone in a NASA-supported collaboration on developing biomimetic materials

AFMs are especially useful tools in studying biological systems, because not only can they image and manipulate samples at molecular resolution, they can do so in physiological conditions  in liquid, and in air if desired. In other high-resolution (down to tens of nanomenters) microscopy techniques such as SEM, a sample must be placed in high vacuum and/or under other destructive artificial conditions to be imaged. Simulating conditions that are as natural as possible is very important to us, as our goal is to understand the molecular fracture dynamics of living bone.

Our group has been developing AFMs for biological applications for over fifteen years. Over these years, branching into biological research has been a natural progression, and often a necessary one. Beginning in 1988 with numerous papers on AFM capabilities and AFM techniques for imaging biological samples, our group soon took on experimental research in biology; by 1990, we had published our first paper in experimental biology - STM and AFM Images of Nucleosome DNA Under Water. . We began working mainly in molecular biophysics in the early 1990s, imaging and manipulating proteins and DNA, but also publishing papers in areas such as AFM and surface science, AFM and materials science, AFM for imaging and measuring properties by manipulation of inorganic samples, and, of course, AFM development. By the mid-1990s, we were also researching biological structures, nacre in particular. We were also studying human platelets and enzymatic activity with the AFM. In 1997, we published several papers on nacre, and the focus of the biomaterials research arm of our group was, by 1997, squarely on biomineralization.

In applying AFM to image at high resolution and mechanically test single nacre molecules in an AFM stretching technique called single-molecule force spectroscopy, we discovered a remarkable fracture-resisting protein-based glue binding the well-known mineral plates of nacre together. Abalone shell is about 97% crystalling calcium carbonate, and the remainder, we found, includes the glue that helps make abalone shell 3,000 times more fracture-resistant than pure calcium carbonate! Apart from being inherently sticky, the glue molecules resist fracture by reacting to impacts with a mechanism that makes them about 100 times harder to rupture  the sacrificial bond and hidden length mechanism. (Figures 1 and 2). This mechanism dissipates large amounts of energy with entropic and enthalpic forces as the tightly bunched hidden length of glue molecules is exposed and stretched out after sacrificial bonds break during an impact (Figure 2). And after the glue molecules have been stretched, they can heal themselves back to their original bunched conformation after the rupture of their sacrificial bonds and subsequent release of their hidden length.

Figure 1 (Left) Schematic of the cumulative effect of bone glue molecules acting together to resist a fracture under an impact. Fracture tends to travel in the glue-like interface between the mineralized collagen fibrils of bone, and the glue shown here is healthy enough to resist the tearing apart of the fibrils, thus keeping the bone unfractured. 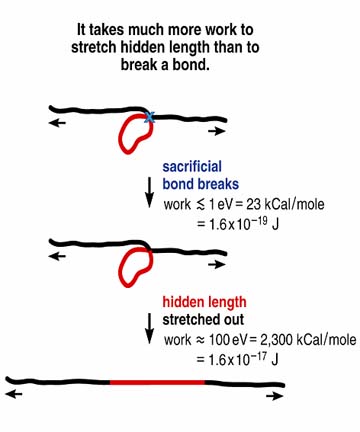 Figure 2 (Right) Simplified demonstration of why it is harder to break molecules that contain sacrificial bonds and hidden length. This type of molecule is active in bone glue, and its presence helps explain why that glue makes bone so tough.

After we established the existence of abalone glue and characterized it, we hypothesized that a very similar kind of glue may also be present in another mineralized tissue - bone - which might help give bone its remarkably tough yet lightweight structure, and its ability to respond dynamically to stresses.

Our first paper in this area showed that bone molecules can self-heal after fracture, by re-establishing molecular bonds. The characteristic effects of this molecular property percolates up through the hierarchical levels of bone, to the extent that a direct correlation can be made between the reforming time of indentations into bone with the forming time of molecular bonds.

After a series of related papers, we recently publicized our finding that there is indeed a protein-based glue in bone similar to that found in abalone shell, using the sacrificial bond and hidden length mechanism to resist fracture; it binds mineralized collagen fibrils to each other. This work was published in the August 2005 issue of Nature Materials. We are now working on characterizing bone glue, a complex and exciting challenge.